The city landmark for those who produce innovation

A source of ideas. A source of ideas. Conversano is considered as a benchmark for innovative. After the PV system that has allowed Giovanni Soldini of the cross? Ocean solo, social automation equipment that will enable people with disabilities to be able to move independently in their own homes, the sensors installed on the technological advances that allow the monitoring of bluefin tuna in the great sea depth, it is the turn of the converter that increases the energy yield of photovoltaic panels up to + 50%.

The device created by a group of engineers Conversano, has won the support of the Region of Puglia (which has funded Por 2007-2013 aid to investment research on small and medium enterprises).

The converter << made ​​in Conversano – explains the engineer. Dino D’Alessandro, CEO of Matrix, engineering companies referred to spin off Sunvision – can you get the most from the photovoltaic panels, exploiting the full potential through the isolation of each module. Soparatutto, overcomes the problem of “mismatch” >>. Is defined as the operating condition of the panels, the production of which energy is often compromised by climatic conditions (cloudiness) or shadow areas procured by the presence of trees or buildings, or by the presence of layers of powder or bird droppings or leaves.

The << >> mismatch is considered among the leading causes of reduced energy production. Based on this assessment, Conversano engineers have designed and developed an innovative device, the converter, which allows you to limit these negative effects, resulting in improved efficiency eneretica of the plants, in some cases, even to the extent of 50%. The project, entitled << Converter for distributed MPPT: energy efficiency improvement >> PV systems, was funded by the Region of Puglia. Partners of the project is the System Far spa Rovereto’s Gruppo Industriale Tosoni who work in the field of Building Integrated Photovoltaic << >>, in particular in the development of high-tech and environmentally friendly applications. This Venetian company, like other national sector, is extremely interested in this project and this has started trials in Italy. The goal of the engineers Conversano is to launch the production of the device on an industrial scale. An event that could cause many new job opportunities. And on which the Region of Puglia has bet. 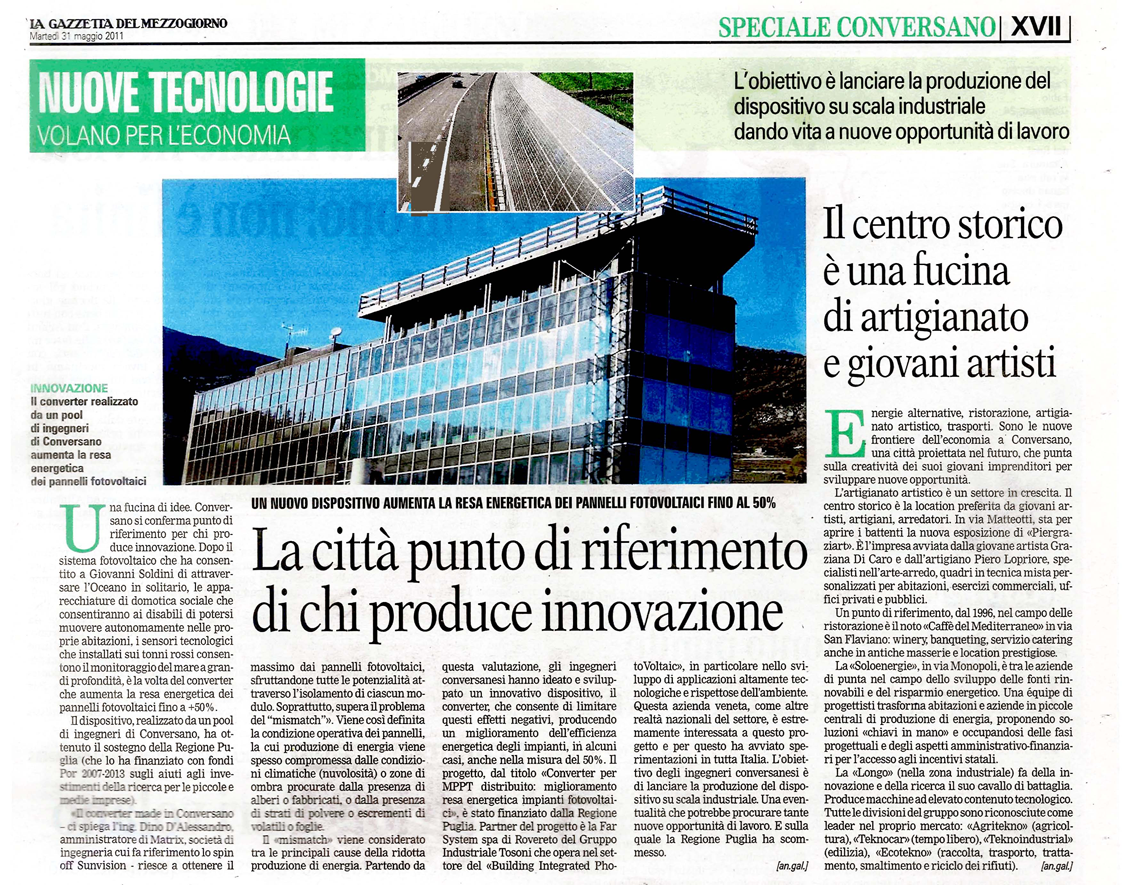